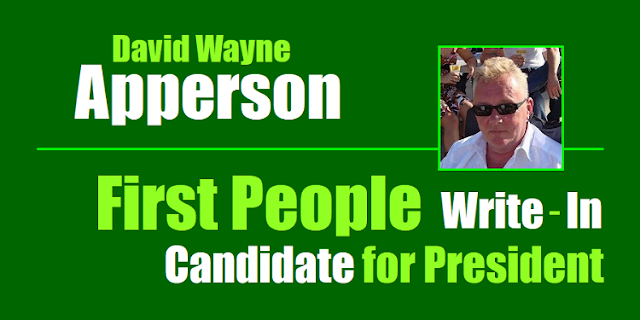 I see a time of seven generations when all the colors of mankind will gather under the sacred Tree of Life and the whole Earth will become one circle again. --- Crazy Horse

Attention First Peoples As a Native American, you understand the importance of having a leader that doesn't judge a person on race, religion, or economic upbringing, but on his/her character. It is time for such a President. A leader who believes every law-abiding citizen has the legal right to prosper in this country. There is such a person!

There is an extremely intelligent candidate who has a history of beating the odds, such as overcoming child abuse, service-connected disabilities, and challenging injustice that isn't fair to the poor and disenfranchised.

The candidate we speak of is David Apperson, who has spent his life successfully dealing with people of every culture, race, nationality, and tongue by keeping to the rule - treat others better than self.

As a Native American, we know you unde…
Read more
More posts